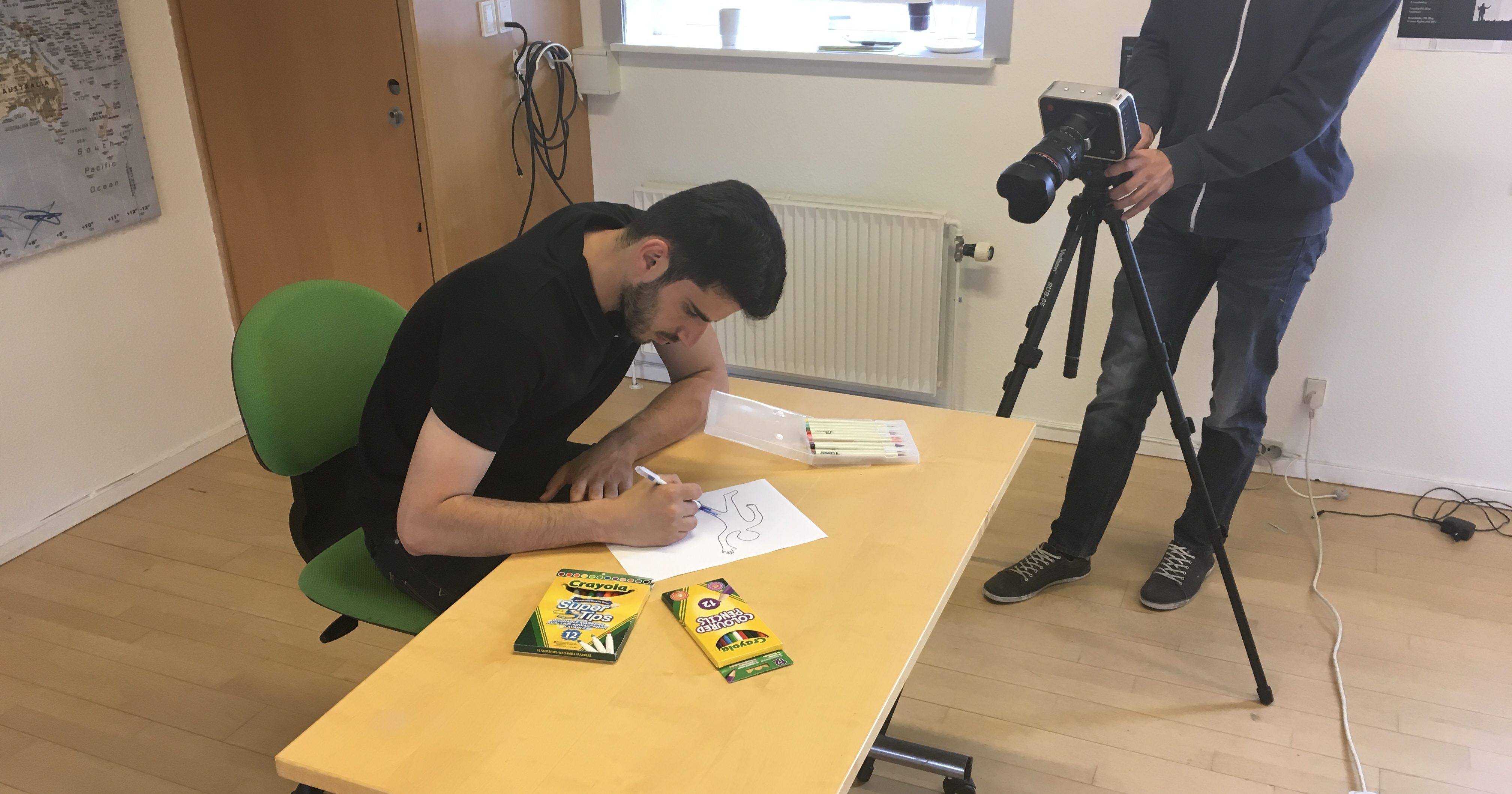 We are Maartje and Annelies, two deaf applied language/Deaf Studies researchers. We have both used language portraits (LPs) in our research and recently we have also given some presentations about this. We see more and more researchers from various disciplinary backgrounds starting to use the method in the context of deaf signers. We think this is great and that LP also should be used outside of the context of research. We also think though that LPs as a research method have some challenges that people who use LPs should be aware of.

Note: this blog is based on an article we submitted to Forum: Qualitative Social Research: “Language portraits: investigating embodied multilingual and multimodal repertoires.”

In this blog post, we talk about what language portraits are and why we used them; how to use and analyse them; and what the specific methodological benefits and challenges are, including some tips for those wanting to use the method (Kusters and De Meulder, submitted). If you have used the method in the context of deaf (and hearing) signers and have things to add, we would love to know!

What are language portraits?

Language portraits are empty whole-body silhouettes in or around which research participants colour or draw to represent how languages, language variants or other aspects or modalities of communication relate to the body. Usually, the drawing/colouring of a LP is accompanied or succeeded by a verbal or written narrative explaining the portrait. We used the silhouette of the abstract ‘gingerbread-man’.

Language portraits as a research methods were initially used by Krumm and Jenkins (2001) for exploring language awareness in multilingual children. Their use has since been popularized by Brigitta Busch who used LP as a research method in multilingual schools in Austria and South Africa, and in other contexts, e.g. teacher training, students, psychotherapy, and participants in L2 or foreign language courses (Busch 2012, 2018). So far, the method has been used in many different research contexts. Language portraits have also been used in other contexts than research, for example by teachers aiming to make pupils more aware of their own plurilingualism and that of their peers.

Why have we used language portraits?

Each of us had used LPs as part of a larger multiple-methods (linguistic ethnographic) study, Maartje in the context of sign language vitalityand Annelies in the context of international deaf communication. For each of us, LP were thus linked to a larger data set that also included language diaries, filmmaking, linguistic elicitation and focus groups. We used LPs to investigate embodied multilingual repertoires of people who use both spoken languages and signed languages. These people are mostly deaf, but also hearing.

Why did we decide to use language portraits as one of our methods?

What prompts and instructions did we give participants?

LPs as a method are highly sensitive to variations in instructions, and prompts are informed by particular research questions and theoretical frameworks. Researchers have used different prompts when providing participants with the empty silhouettes. Maartje, following Busch’ (2016) use of a more flexible prompt, asked participants to think about the languages/modalities they use(d) now, in the past or hoped to use in the future; languages/modalities they associated with specific persons or places, or other ways to express themselves; how they felt about them; which colour they would attribute to them, and with part of the body they associated with them. Annelies, inspired by a prompt used by Busch (2018), asked participants to draw languages or modalities that were important to them (some of her participants therefore deliberately excluded several languages they were fluent in). Maartje also said participants could use the given silhouette but also could draw a new one, draw a second one, and draw inside or outside the figure. Annelies asked participants to tag/label the colours they used with written terms, while Maartje did not do this.

Our slightly different prompts in combination with the different research contexts resulted in different LPs: Annelies’ participants mostly stayed within the contours of the silhouette and coloured the whole figure or many sections of it, treating the body as a container of languages, while Maartje’s participants were less inclined to colour in sections of the silhouette and many drew outside of the figure, thus situating the body within their environment.

When the portrait was finished, we asked participants to explain it, and filmed the narrative. You can see parts of narratives here (Maartje website) and here (MD blog). All narratives were signed (in VGT and IS respectively); except for two of Maartje’s participants (one deaf and one hearing) who chose to speak Dutch. For these situations, Maartje worked with a VGT/Dutch interpreter. For some participants this narrative was rather succinct while with others this led to a whole new conversation.

When participants finished their narratives or even during the narrative, in some cases we asked additional questions, for example because part of the narrative was not clear or because we would like to have more explanation about a specific colour, symbol or location in the LP. This sometimes resulted in changes or additions to the portrait. Also, some participants while signing their narrative or after having finished it, realized they forgot or omitted something and asked if they could add this.

How did we analyze the portraits an narrative?

For the portraits, we analyzed:

For the narratives, we did a content analysis but also analysed together with the portrait, for example because some participants ‘pasted’ certain signs they used in their narrative on their portrait, and as such effectively became their portrait.

Benefits and challenges of using LPs as a research method

And apart from research?

Several teachers have used language portraits in classrooms with multilingual children, which gave the childre an opportunity to talk about their languages, different aspects of their linguistic identity, and validating these languages and language variants. LPs thus can be used “to initiate and facilitate a discussion on linguistic identity in the classroom” (Dressler 2014: 49). We think it would be great if the method would be used for deaf children and youth to explore their linguistic identities as well as to show and describe these experiences to others.