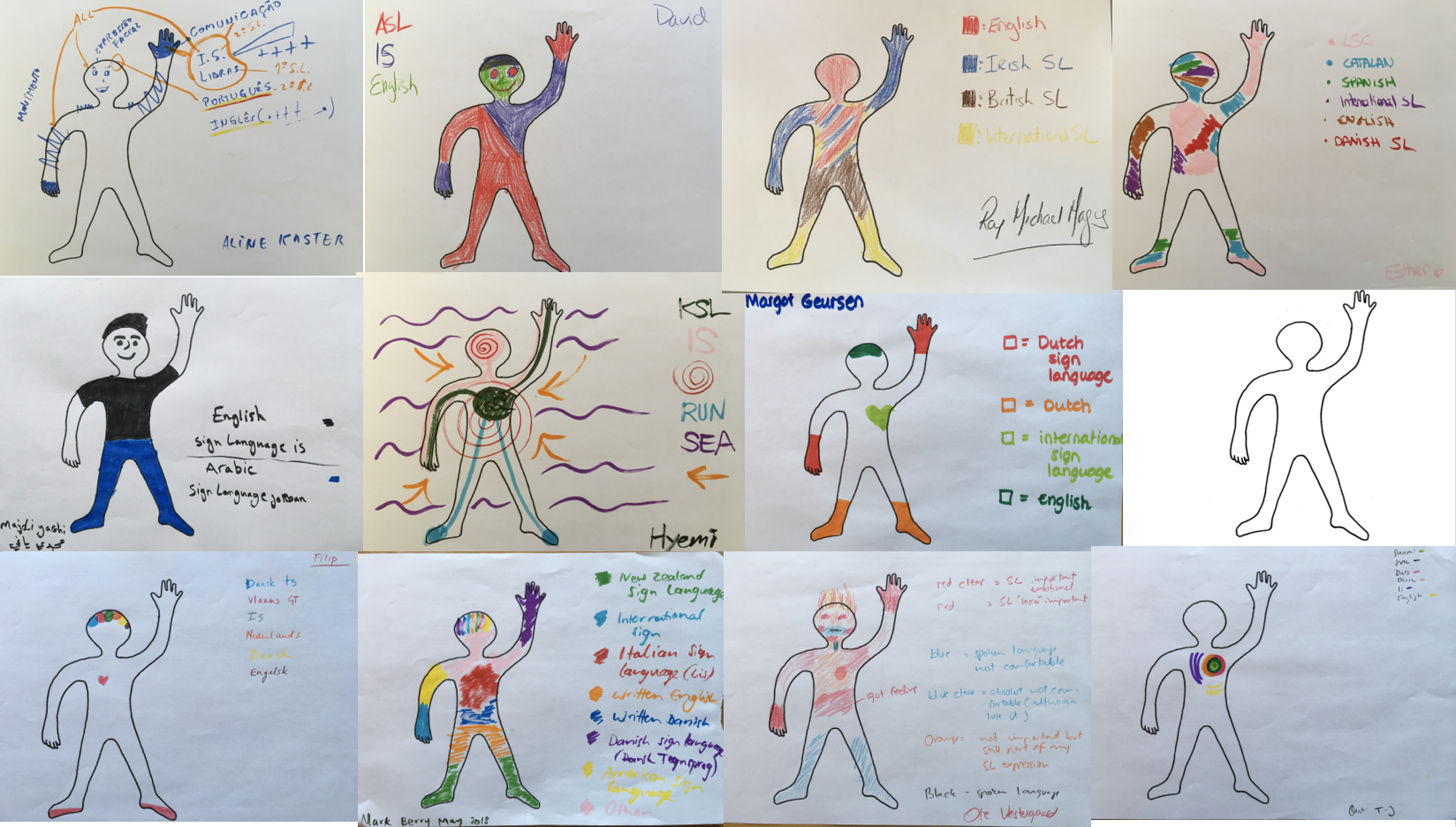 I used the language portraits along other methods in the context of Frontrunners, a 9- month international deaf education course in Denmark that takes place every year, and where the language policy mandates use of IS and written English. Seven students completed language portraits: from South-Korea, Spain, Ireland, the US, Jordan, the Netherlands, and Brazil (age 19 to 33), as well as the four teachers, from Denmark, Finland, Belgium and New Zealand (age 28 to 56). My aim was to see if, where, and how Frontrunners and their teachers placed IS in their language portrait and how for them, IS relates to their other languages.

Researchers have used different prompts when providing participants with the empty silhouettes. I asked participants to think about languages, modalities or other ways to express themselves that were important to them; how they felt about them; which color they would attribute to them and which part of the body they associated with them. I also asked the participants to tag/label the colors they used with written terms. Subsequently, narratives were filmed, and you can see several (subtitled) examples in the videos in this article. In this text, I will not repeat everything the participants said, so interested readers could watch the embedded videos. Note that the videos represent only excerpts from narratives: narratives were generally longer especially since I asked additional questions about colors, body parts and so on. While all portraits were extremely rich, in the scope of this blog I will discuss only a few examples.

Since I asked participants to include languages that were important for them, most people deliberately excluded some languages they knew. All of them included IS in the portrait or the narrative, by giving it a separate color or separate tag, or by naming IS in the narrative. When the portraits were completed, the participating students had been using IS for 8 months on an everyday basis (and the teachers between 8 and 13 years). In May 2018, Esther (Spain) said IS was now IN her, in contrast with the beginning of the course in September 2017.

Some people placed IS on more than one place on the body, thereby locating IS together with other languages in some body parts, such as in the portraits by Esther and Hyemi. Esther places IS in the head, belly and right hand, and in the video you can see why she associates these places with IS. Hyemi is from South-Korea and her arms contain both Korean Sign Language (KSL) and IS (by way of lines), but while the KSL lines lead to a circle on the chest, the IS lines lead to the head.

For Ole, who is Danish and the oldest Frontrunners teacher, IS is part of a larger phenomenon of everyday languaging, and he did not name IS in the portrait, tags, nor gave it a different color, but drew red and orange hairs on his portrait, signifying complexity and the effort it costs him to shift between IS, different forms of Danish Sign Language, and spoken Danish. He thus groups different kinds of languaging together in the same color/locations but at the same time, through his choice of colors and drawing he also indicates that they confuse him and can clash.

While Esther places IS in relationship to English, Mark and David both placed IS in relation to ASL. The more conventionalized versions of IS often include a lot of ASL signs. Mark, who has lived in the U.S., specifies that his ASL (which is on his upper arm) can exceed into his IS (on the hand). David, who is American himself, colors one hand red (ASL) and the other blue (IS), with the adjoining arms in the opposite color, to indicate that he is still confused between IS and ASL, mixing them up.

Apart from David and Mark, other participants did not include ASL in their language portraits even though all participants knew ASL at least to some extent. (Admittedly, some participants may see the ASL signs they know as subsumed under IS.) ASL was a prominent theme in the other methods used (such as an interview preceding the language portraits), and many of them have strong opinions and feelings about ASL. This influence of ASL in IS is resisted especially in the European context, where ASL is often seen as an imperialist language.

In interviews and group discussions not related to the language portraits, participants very often talked about “us” and “we”, “we have to”, “we should”, “we won’t”, … This became “I”, “me”, “I want”, “I should”, etc. in the narratives related to the portraits. While in interviews people might tend to follow more what is expected from them, the portraits allowed them to focus on their personal experiences and desires linked to language. They may not relate to some languages they know in a deep, personal way, not locating them “in” themselves.

It is also interesting that IS was mostly treated as a bounded language in the language portraits, on a par with national sign languages. Indeed, in the context of Frontrunners, especially towards the end of the course, IS is to some extent conventionalized in the group. However, in interviews and focus groups, IS was also presented as a process of translanguaging, ie. a flexible and fluid process of adapting to each other, in contrast with national sign languages which were seen as more fixed and rigid. A few participants inserted this view of IS as fluidity in their portrait, e.g. Hyemi’s holistic perspective on language as swimming in a deaf sea and running around the world, Ole’s emphasis on the constant switching, and Mark’s pointing out that he uses IS where other languages fail. Outi approached IS as an encompassing phenomenon also affecting the other languages she put in her portrait. She places IS on the side of her heart in three bows, indicating that there is not one IS but that it is diverse. She also points out that her other sign languages were influenced by IS.

In their portraits, participants drew clothes, arrows, fire, spirals, and other metaphors related to languaging including IS. The choice of the colors was also metaphorical sometimes. For Esther, “IS is purple. Before I wasn’t a feminist, thanks to Frontrunners I started to understand feminism more. Feminism is purple that is why I put a connection to IS.” Outi saw purple as a powerful color: “IS is purple because it is a strong colour. IS has power – the power of connecting people through language. I see IS as powerful.” And Hyemi saw IS as pink because it is sparkling and beautiful, but said that using IS is like “swimming in a purple sea” of diverse deaf people; purple for her signifies a mixture of different colors. The latter also suggests that the IS space is seen as a large one, a worldwide phenomenon. This universal perspective is echoed in Mark’s comment that “IS is blue as the Earth, water and sky”.

The expression of the narrations exists in symbiosis with the language portraits. The narrations of our participants included people pointing at, or touching parts of their body and engaging in ”pasting” particular emotions and languages on particular places of both their body and their language portrait, drawing parts of the language portrait on the body by signing, and let them flow in each other (eg. Mark’s example of ASL exceeding into IS). Literally, people perform and become their portrait when they sign about it. As the videos with the narratives make clear, participants focused on emotions (such as anxiety, pleasure, pain, stress, joy, fear) regarding the multilingual experience, related to particular societal or interactional contexts and to aspirations, desires and memories. In the portraits discussed above, IS is seen as related to other signed languages, is seen as part of multilingual action, is seen as different or more diverse from other sign langauges, is seen in relation to English (a spoken language) or ASL (a signed lingua franca). In short, these language portraits evoke information on the individual and embodied experience of deaf multilingualism in general and IS in particular, and the embedding and interlinkage of IS in a broader multilingual experience.