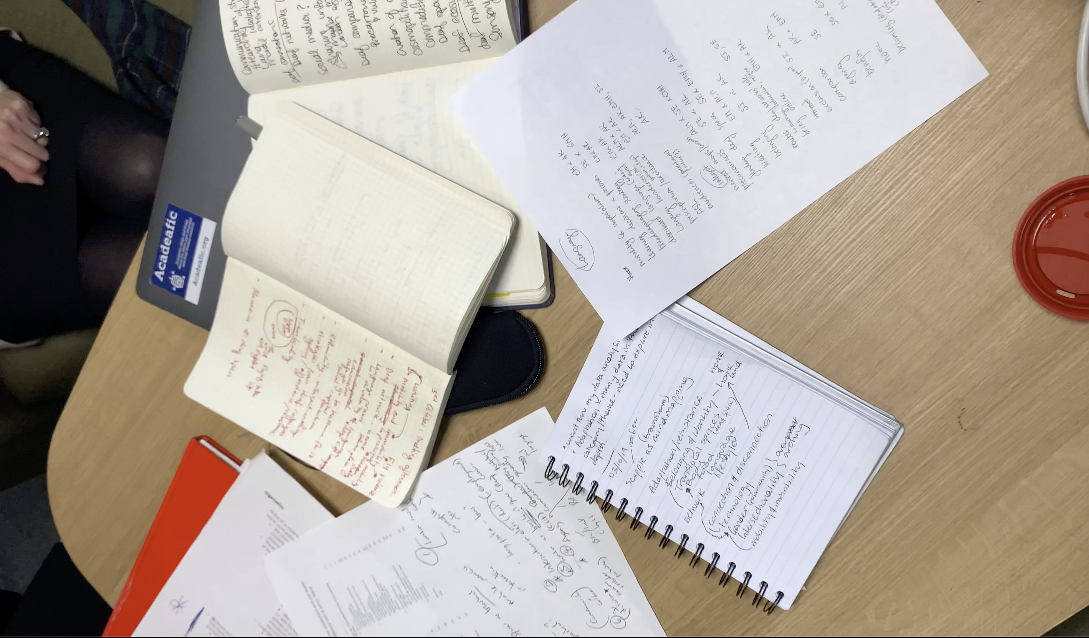 We are now half-way through the 5-year MobileDeaf project, which started 2.5 years ago in April 2017. That means it’s time for an update to outline what we have done until now! We’ll start with some fun facts!

·     Our interviewees originate from 74 different countries so far

·     Steve went to a Bingo evening in a London deaf café for observations, and won, for the first time ever! He donated the prize back to the organisation.

·     When Amandine woke up one morning during her field work in Kakuma Refugee Camp, she saw she had shared the room with a scorpion!

·     During her field work on deaf tourism, Erin went to the “Monkey Forest” in Bali over 25 times!

·     Annelies has collected a stack of press cards she obtained to make it easier to do research at conferences and events!

·     Once, when Sanchu and Steve went to a pub for observations, Sanchu was refused entry because the bouncer thought she looked younger than 18!

·     In Kenya, Amandine regularly ate the same food for breakfast, noon and dinner

·     We interviewed people in an interesting range of different places, including in the plane, on a football pitch, in a hospital, in auditoriums, in a mosque, in cafes and restaurants, in hotels, on a festival site, in schools, in the car during traffic, in universities, in classrooms, on the beach, in churches, in the poster area of a conference, in the UN office and on a boat.

And here’s what each of us has been up to in the past 2.5 years:

Amandine, who focuses on forced migration in the Kakuma Refugee camp in Kenya, undertook research in the camp for three months, in 2018. Subsequently she had to take 1.5 years off from the project and has now returned. In Kakuma she engaged in participant observation in different places such as schools, churches, the UN office, and refugees’ homes. She composed her observations into field notes and also did some interviews towards the end of her stay, with men and women of various ages, of different ethnic backgrounds such as Turkana and Somalia. She is now in the process of translating the interviews and revisiting her field notes, identifying key themes. This will help frame her specific focus during her second field visit to Kakuma, which is scheduled in 2020, when she will make recordings for her ethnographic film.

In 2018 and during the early part of 2019 Steve and Sanchu, who do research on labour migration in London, interviewed a range of people and visited a large number of deaf events all over the city to observe how migrants took part in them, and to interact with deaf migrants:  examples include, places of worship, pubs, cafe’s, cinema’s, community centres, colleges and Deaf clubs.  Steve is currently analysing his data and aims to publish his findings in 2020. Sanchu has started work on the ethnographic film in London, with Jorn Rijckaert from Visual Box, filming deaf migrants in different places such as cafes, a football pitch, a mosque, a church. She has analysed the interviews for the film as a pilot for her PhD: in 2020 she will narrow down her focus to young deaf female migrants.

Annelies does multisited research on professional mobility in sites around the world. Between September 2017 and now she has done research and made recordings for her film with Jorn Rijckaert at the SIGN8 conference in Brazil, the Frontrunners course in Denmark, an international Bible translation centre in Kenya called DOOR, the Clin d’Oeil festival in Reims, and the WASLI and WFD conferences in 2019. In the Fall of 2019, they are covering two big sports events, the Asia-Pacific Deaf Games in Hong Kong and the Winter Deaflympics in Italy. Annelies did over 100 interviews about International Sign (many of them were only brief, but very in-depth) with teachers, presenters, performers, leaders, participants and students. They ranged from people who came to a deaf international event for the first time and people who have been active internationally for a longer time. Her interviewees came from diverse backgrounds regarding country, gender, age, ethnicity, sexual orientation, and religion and included deaf-blind and deaf-disabled people.

Erin investigates tourist mobility in Bali, Indonesia. She stayed there for seven months, encountering tourists from Australia, France, New Zealand, the US and Europe, and observing their interactions with deaf tourist guides and deaf Balinese people. She also stayed in Bengkala, the so-called deaf village, to observe tourist practices in the village and observed how the village is impacted by tourism. After her return to Edinburgh, she worked on coding her data, and with Jorn on the paper edit for her film. She has started writing articles of which she has submitted two so far. This past summer, Erin attended two large international events in France, the Clin d’Oeil festival and WFD, interviewing deaf tourists there as well. Erin recently moved back to the US to work as Assistant Professor of Deaf Studies at Gallaudet University but she remains active in the MobileDeaf team through an agreement between HWU and Gallaudet University, visiting Edinburgh regularly for MobileDeaf meetings.

The four ethnographic films we are producing are on their way, and each film has its own timeline. First Erin’s film will be completed and disseminated and then Sanchu’s, both in 2020, followed by Annelies’ and Amandine’s films in 2021.

So we each work on a particular subproject within MobileDeaf, but how do we link them together? We work with the same main theme of international deaf mobility, focusing on how deaf people interact in these contexts and experience these interactions. Within each subproject, certain key themes are emerging, and we are now at the point that we try to identify overlaps between these key themes, and parallels and divergences between our findings.

During our three-day team meeting in the first week of October 2019 we focused on this holistic process. Before our meeting we shared written drafts, interview excerpts and field notes. Our first day meeting started with an unstructured discussion in which we shared things that we found interesting, identified patterns and converging and opposite examples that could be unified within keywords. Annelies made notes during the conversation and on the second day she constituted a conceptual map based on these notes, consisting of 50 key terms. This was used as a basis for the meeting on the third day, during which we expanded the conceptual map to over 100 concepts. This map was then used to create the first draft of a table of contents for the book we will write.