Last week, the MobileDeaf team organised its first reading/film discussion groups at Heriot-Watt University in Edinburgh. These reading/discussion groups are built around themes (about 15 themes over 6 months) and last week’s theme was Ethnographic Filmmaking. Each of us will direct a full-length ethnographic film within the frame of our own MobileDeaf subproject. Ethnographic film is a type of documentary film that is rooted in long-term ethnographic field work. We read four assigned articles, all related to ethnographic, reflexive and participatory filmmaking. We also watched Ishaare: Gestures and Signs in Mumbai, a 2015 film directed by Annelies Kusters and discussed particular approaches to ethnographic filmmaking. After this, we had an inspiring two-day visit by deaf filmmaker Jorn Rijckaert.

Ishaare: An Example of a Deaf Ethnographic Film

Ever since she started spending time in India (including 3 years of living there), Annelies had been interested in gesture as a part of everyday communicative practices. She conducted research in India about deaf space on trains and translanguaging in public spaces. In her research, she used film as a means of documenting the visuality of gesture and deaf peoples’ co-creation of spaces. Annelies worked closely with representatives of the deaf community in Mumbai and her co-researcher, Sujit Sahasrabudhe, who is also her husband. Annelies and Sujit selected 5 deaf people who had already had experience in video production and contracted with Jorn Rijckaert of Visualbox to provide formal training on deaf filmmaking techniques. Three of the trainees (Rohan Satardekar, Harish Chaudhari and Prakash Khairnar) became the cameramen for this film which was edited by Jorn.

There are certain techniques that had to be thought out in advance, such as positioning of the sign language interpreter to ensure they are clearly visible but don’t dominate the shot, for instance. Other decisions included framing to ensure the signing was clear, how to best frame an interviewer and the interviewee, and so forth. More background on the making of Ishaare can be found below:

After watching Ishaare, we engaged in a discussion of what it means to make a film as deaf researchers doing deaf anthropology. We discussed the technical decisions that went into the making of Ishaare, as well as the process of choosing the protagonists in the film, representations of their everyday experiences, shooting, editing, and the selection of themes for the interlinking “chapters” in the film to develop the story arc. Finally, we discussed the film as a tool for elicitation of more data on the ideologies surrounding gestures and signed languages in India.

Our readings for this week included readings on the possibilities of doing reflexive research with participants using video. Reflexivity is an integral part of a good ethnography, especially because of the inherent power relations involved in research. Reflexivity includes critical reflection on methodology. One of the visual methodologies we discussed was participatory video, which is a methodology driven by the idea that the reflexivity of the research participants and the researcher emerges naturally out of the process of making videos. Participatory video is thought to have the potential to systematically elicit participants’ reflexivity as they make films about their own lives and the issues important to them with minimal instruction from the researcher. As participants make their own films, they intervene in their own lives and re-create their everyday lives through film as the reframing of their everyday experiences becomes a new way of seeing. This can give researchers insight in what people construct as important for themselves and it can be liberating for the participants but the researcher runs the risk of an outcome that has nothing to do with the original research question.

The framework these articles provided for our discussions resulted in deliberations such as, how could we, MobileDeaf researchers, use this methodology in our individual research projects and in our filmmaking? We came up with the idea to use participatory video in our research methodology to learn what is important for our participants, but will ourselves direct the contents of the full-length ethnographic films that will be the outcome of our project. After all, one of the aims of the ethnographic film is to disseminate research findings, and doing four independent but interrelated projects, we want to ensure we are covering the same main themes. There is the possibility of integrating some of the participatory videos in the final ethnographic films, though.

Jorn Rijckaert visited us at Heriot-Watt and gave an excellent presentation on the history of deaf cinema. He opened his presentation with a poignant story about his parents finding out he was deaf and going to see Children of a Lesser God to better understand their deaf son. He showed us a brief clip of the opening scenes from this film and asked, “Why do you think my parents left the theater in despair about the future of their deaf son?” The opening clip shows William Hurt with wind-swept hair standing by his truck on a ferry sailing through grey waters towards a remote, mist-shrouded island. Jorn then explained that in Belgium, where he is from, a famous priest worked at an island known for its leprosy patients and the opening scenes of the Children of a Lesser God used well-worn tropes of deaf isolation to invoke pathos in the viewer by showing a boarding school on a remote island. 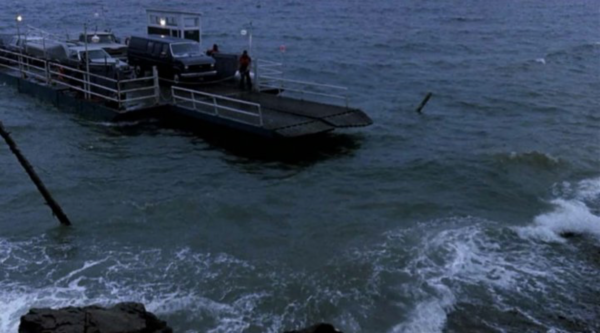 This was a powerful opening for his talk that set the stage for our discussions of deaf cinema. Jorn criticised films that exoticise deaf people or construct them as deficient, isolated beings with problems solved by hearing saviors. He explained that his research focused on the question, what is deaf cinema? Jorn brought us up to date on the history of deaf cinema, explaining that since 1902, there have been more than 150 Hollywood films showing some kind of bias against deaf people, giving the examples of Jane Wyman in Johnny Belinda and more recent films such as Tribe.

What makes a film deaf and why?

Our discussion also covered topics such as, what is a deaf plot? What are “deaf” shooting/framing compositions? How deaf filmmakers frame a shot is generally different from how a hearing filmmaker would frame a shot: deaf filmmakers generally make more use of medium shots to include signing space in the shot. A close up shot is associated with being hearing/speaking and Jorn showed us how in The End, becoming hearing was associated with zooming in on the person’s face to indicate they were now speaking rather than signing people. Other examples included compositions of shots for interviews in sign languages and/or with sign language interpreters. 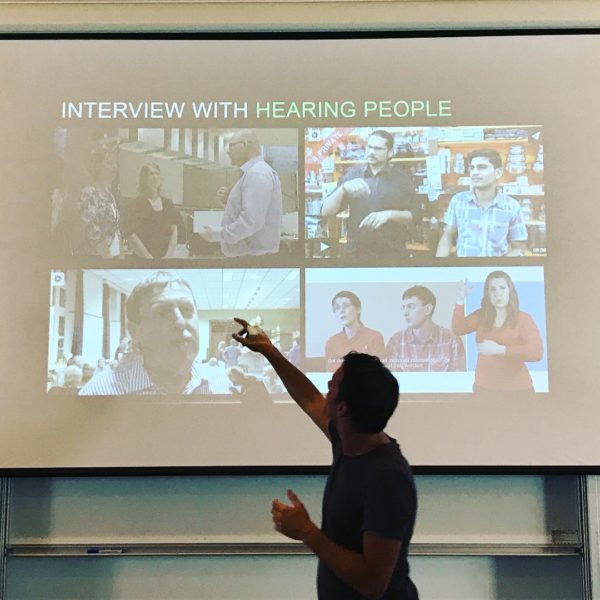 At the end of the week, the MobileDeaf team met with Jorn to discuss our individual films and the sort of preparation material needed, schedules, and so forth. Because of the differences between our field sites, we expect there will be significant differences in how we go forward producing our films, so we discussed different strategies such as working with professional deaf filmmakers and editors or training deaf camerapeople in the countries where we do research. As the four of us go forward, each of us will find out which strategy works for our individual project, and we hope that in the end, we will have a lot of know-how and tips to share on deaf ethnographic filmmaking. Annelies is starting to shoot for her film next week in Denmark, and she will share her experiences in the next blog. Stay tuned!