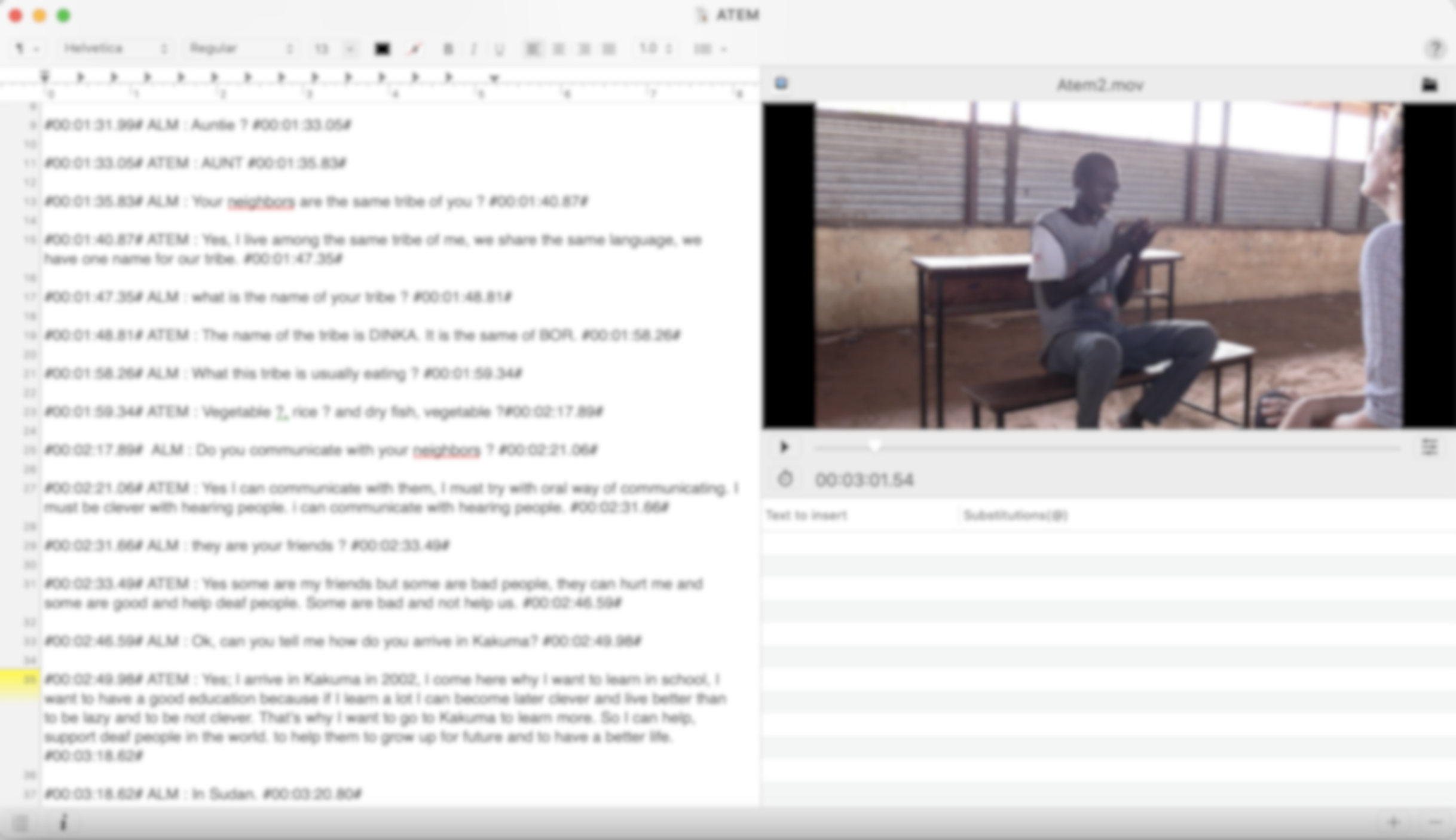 I choose to translate interviews into English rather than working directly with signed language data, to be able to be able to quote the interviewee exactly. A written text-based document of a recorded sign language interview also gives more options for analysing and storing data. Translations of the interviews help me to quickly find the parts or specific terms or quotes that I need for the analysing and writing process of the PhD. However, throughout the process of analysing and writing, I always go back to signed language data to check my translations.

To transcribe the seven interviews I did with deaf inhabitants of Kakuma Refugee Camp, I used a program app called Transcriptions. This app opened the video right next to the text screen and time stamps were inserted automatically which made the task of translation much easier. Simply clicking on these time stamps makes it also easier for me to return quickly and repeatedly to specific parts in the videos.

As in any sign language translation, the process was challenging due to the differences between linguistic structures, cultural usages, historical contexts and the modality shift. However, there was an added complexity in my research in the process of translating data and that was my positionality. I am a white researcher and while I am a native signer, I had only been immersed for a few months in the specific sign languages used by the people I interviewed in Kakuma. I did not have the option of asking interpreters to translate the data collected because they were not aware of the sign language used by deaf refugees. At times, it was difficult for me to pinpoint what exactly deaf refugees meant, and it was very hard to translate accurately when the deaf refugees used very little mouthing to accompany their signs.

For instance, in the interview with Isse, he explained that it is his desire to study in a university in USA and he said that Kenyan signs are harder to learn compared to the USA ones. In my first transcription, I translated his signs of “Kenya” and “signs” as “Kenyan Sign Language” (KSL).

I assumed when I was watching Isse signing in that way that he meant Kenyan Sign Language as in our western tradition we give names to sign languages for instance for ASL, LSFB or BSL. In Kakuma Refugee Camp, there are other naming practices of sign languages used by deaf people such as for example the term “village signs”. The word “village” is signed with a protruding index finger with the palm positioned on the head.

My own schema of naming sign languages had an influence on my translation. After discussions with my supervisor, I decided to stay closer to the signs in my translation. For example, for Isse there are two ways in which his utterance “KENYA SIGNS” could have been translated: “Kenyan signs are hard” or “in Kenya, signing is hard”.

Those two phrases have different signification, the first one could mean that the Kenya signs are difficult to practice or to understand and the second one could mean that in Kenya, it is difficult to sign. Isse and some others deaf refugees find that Kenyan signs are hard could be probably related to his perception of KSL compared to ASL. He likes the American sign language because he found communication was much faster than for KSL. They also imply that ASL is a richer language and much more extensive than KSL. Some deaf refugees desire to be resettled in the USA thus learning ASL helps to be able to continue studies in the USA. In the final, I choose to translate Isse’s utterance “KENYA SIGNS” to “Kenyan signs are hard” because it is closer to Isse’s signs and reflect on what he thinks he means.

I realised that I needed to watch the interviews again to correct some of my translations to ensure they were as close as possible to what deaf refugees were saying with a more literal style of translation. In addition to this, for any of the excerpts that I selected to quote in my study, I closely re-examined and corrected these to ensure accuracy. The videos were always on hand if I was unsure about any of the translations, and I often revisited them (with the help of those useful timestamps) and made changes.