What is the difference between deaf ethnographic filmmaking and producing documentaries for television and cinema?

This question was raised during a filmmaking workshop hosted by MobileDeaf on 17-18 September 2018, attended by the filmmakers from Belgium and London we work with. As a part of its research and dissemination, the MobileDeaf team will produce a film for each subproject. Of these four films, two are currently in progress. MobileDeaf will also produce a fifth film: a “making of” for the four films combined. All of the researchers and filmmakers involved with these films are deaf, leading to a unique moment where the precepts of deaf ethnographic filmmaking are emerging, as well as new approaches to visual methodology.

Annelies and I have begun the process of making our films on International Sign and tourism in Bali, working with Jorn Rijckaert of Visual Box, a deaf-owned business based in Ghent, Belgium. For the film on labour migration, Steve and Sanchu (Steve’s research assistant) will work with a team from London: Bim Ajadi and Cathy Heffernan, two deaf people who are experienced filmmakers. Bim and Cathy have worked in television and documentary film for many years. The primary aim of this workshop was to introduce Bim, Cathy, and Sanchu to ethnographic filmmaking, which is very different from filming for television or cinema. Another purpose of this workshop was for Annelies, Jorn and I to reflect on our filmmaking collaboration.

During the two-day workshop, Annelies, Jorn and I described to the London team how we worked together on our projects, explaining the different ways anthropologists and filmmakers collaborate. Not each project is the same and each one presented its own contextual challenges for filming, such as for example, filming in tight, enclosed spaces, including a fish market, cars and boats, as well as impromptu encounters at conferences and sporting events.

The diverse settings of our projects, the mobile nature of our research and the phenomena of deaf communicative practices resulted in approaches to ethnographic filmmaking that are inherently deaf, nimble, and visual. Examples of the nimble approach necessary for our projects include choice of equipment and contextual decisions, such as the use of an iPhone X, a smaller camera, and a drone to do the bulk of filming for my project on tourism in Bali, as opposed to the larger cameras used for Annelies’ project in Denmark and Brazil. 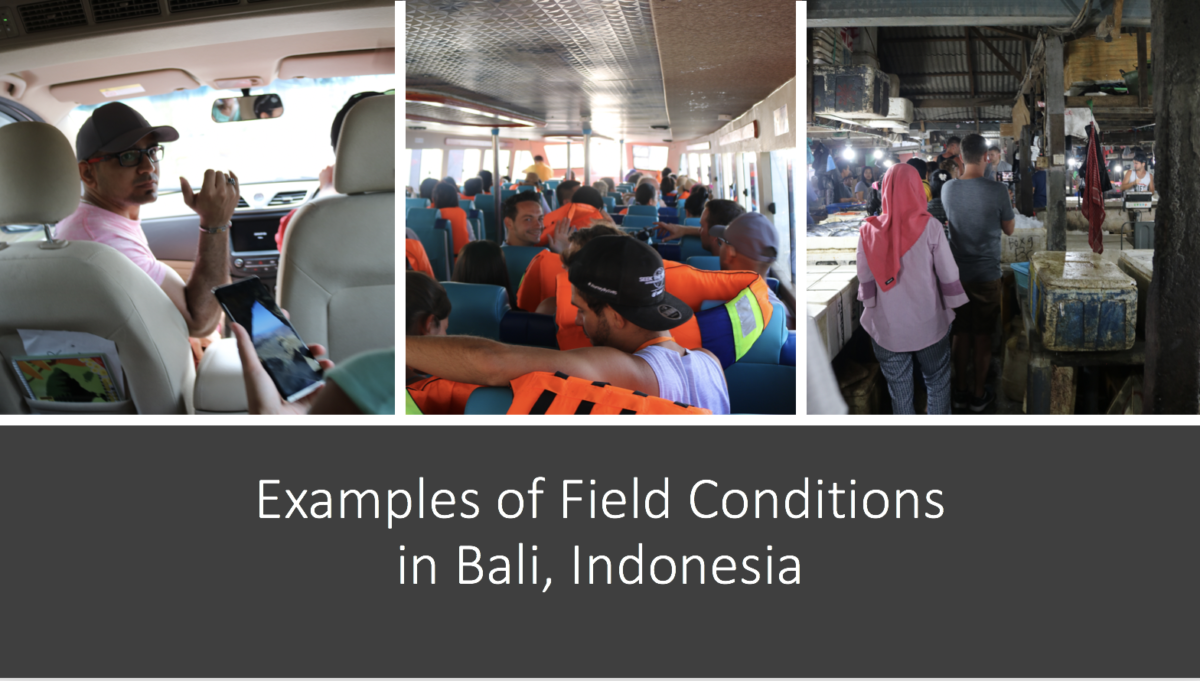 Jorn and I shared our recent experience of filming in Indonesia and Annelies discussed her experience of filming deaf people in international settings in Europe and South America, as well as in Mumbai, India. Our discussions included topics such as the purpose of ethnographic films, which is not to educate but rather, to showcase and analyse the data itself using visual methodology. As such, the methodology and process of filming an ethnographic film is different from filming to entertain, educate or sensibilise, as in a documentary.

Anthropologists are not as concerned about having a fixed storyline unfolding in a neat sequence, as their work is guided by their research themes; whereas filmmakers are more concerned about their ability to edit a film with footage recorded according to a script and/or recording (just) enough footage of the right material to make a film. As Jorn likes to say, “Waar is de rode draad?” a phrase in Dutch that roughly translates into, “Where is the red thread?” meaning a thread that strings the footage into a coherent storyline. As anthropologists take the approach of following people or filming a situation to see what happens, this can sometimes lead to a difference of opinion between the researcher and filmmaker regarding priorities in terms of time and focus.

One of the considerations within this project is that the audience is broad and diverse (community audiences, academic, deaf, hearing), meaning that we are filming with our research participants in mind, as well as other researchers and a more general audience. This requires careful thought in the editing process, especially concerning situations where a conflict is not overt, but rather, simmering underneath the surface. How to represent this accurately, without sensationalising the situation? How much of this conflict should we show and how? If we don’t edit in a way that overtly shows this conflict, will the audience understand the data and how it connects to the research question? Films are shaped with editing techniques, which can be powerful in terms of creating a framework for the audience to think or feel a certain way.

Another important issue we discussed during the workshop was the possible consequences and/or the impact of the film on the people involved. One of the overarching tenets of our projects is to draw attention to the research participants themselves, their stories, everyday practices and opinions, showing rather than telling. In some films made for a hearing audience, a voiceover narrates the situations as they unfold in order to help an audience understand what they are watching. In some deaf-made films, captioning and/or a signing narrator serves the same purpose. In our project, we purposefully avoid having this as a part of the film, relying on interviews and direct quotes to showcase the perspectives of the people involved in the film, allowing them to sign for themselves.

One of the things we will have to work through as we move forward with the editing process is: how to show what is data? For example, my research focuses on the practices of translanguaging, summarised here for the purpose of this blog as “… the deployment of a speaker’s full linguistic repertoire without regard for watchful adherence to the socially and politically defined boundaries of named (and usually national and state) languages” (Otheguy, García and Reid 2015). The footage for my film includes rich visuals of deaf tour guides and deaf tourists pointing, speaking English and/or Indonesian, learning International Sign, using Google Translate, gesturing and mouthing, sometimes in rapid succession within a few seconds, which beautifully illustrates the theorisation of semiotic repertoires, as well as spatial affordances and constraints. The question is, how to show the relationship between theory and practice onscreen? And how to direct viewers’ attention to what we want them to notice in these interactions?

The above is an example of how I use video in my research. This clip is from the Monkey Forest in Ubud, Bali. This clip was filmed just after a monkey jumped on this woman’s backpack, unzipped it and nicked her hard-to-find lotion that you can only find in Germany. She is trying to explain to the staff at Monkey Forest what was taken. The man in the green works at the Monkey Forest and he was trying to help recover the item, thinking that it was something like a smartphone or a camera. This interaction shows a rapid succession through communicative repertoires and how deaf people are able to quickly move from strategy/modality to strategy/modality, working around spatial constraints (e.g. gesturing, using her hands in an effort to show what the object is, asking for a smartphone to type a note to show, then gesturing and mouthing in English when it turned out the smartphone was not available).

Only video could have captured the rapidity of this woman’s succession between modalities. It would have been very difficult to write out a description of this encounter on my notepad or to try to capture its complexity with photographs. This video is a brilliant example of the unconscious movement through a hierarchy of communicative modalities and the almost-simultaneous combination of resources to achieve understanding in a short time frame (e.g. a smartphone was the default option, then an attempt at iconicity by using her hands as a referent to the object, then mouthing “YELLOW” in English as the last option). Finally, this video captured how we (the deaf tour group) and our communicative practices became a spectacle for consumption by other tourists (e.g. a hearing woman, the blonde in the right corner of the frame, stared at us the entire time this dramatic communicative encounter unfolded). This clip exemplifies the tourist gaze and raises dialectic questions about who or what is being consumed in tourism.

This video was a good example for the London film team about what they should try to film. It illuminated situations of unfolding communicative encounters that should be filmed with a wide frame, in addition to a close up of the possible strategies used to achieve understanding, such as handwriting on a notepad, image, or text on a mobile phone. Jorn explained that he always worked with his colleague, Jente, because having two cameramen is of enormous benefit in this kind of ethnographic filmmaking. One cameraman can film the situation or activity with a large frame, showing the whole scene, while the other cameraman films close up. This is especially salient in ethnographic filmmaking about deaf communicative practices, as deaf people use a diverse set of resources and different strategies to try to make meaning and achieve mutual understanding, often in a short time frame.

In another example from his experience working with Annelies, Jorn explained, “For filming deaf communication in a group it’s important that cameras cross-film,” meaning that there are two cameras filming the activity or situation from two different angles to capture various perspectives. This is also useful in cases where Jorn has to suddenly leave the scene. Jorn explained that, “If I suddenly leave a situation we are both filming in order to follow other people with my camera, Jente knows he must adapt his camera frame too. It is hard to predict the situation”; however, communication helps make this process smoother.

It is critical to be mobile with the camera and flexible enough to be able to quickly switch between different framings. Sometimes the researcher will want the filmmaker to record something as data rather than as footage for the film. Also, researchers and filmmakers might have different notions about what is interesting to record for the film and what is not. Jorn explained “It sometimes happens that I will be filming something and I think it’s not interesting and lower the camera but then Annelies sees something that interests her and tells me to carry on.” Sometimes it is challenging to make these decisions as camera batteries quickly run out and cameramen need breaks from filming too. Jorn explained though that even when he takes breaks, he is always ready to film when something interesting happens.

This conversation illustrated the need to find a middle way between experienced deaf filmmakers’ way of working and an approach that is more ethnographic and data-oriented. In closing, Jorn advised Bim and Cathy to keep their style but be aware of how filming for an ethnographic film is different from making a documentary or a film for entertainment. He told them to not expect a ready script but rather, to let the script unfold during the filmmaking process itself. It was important to see this as a process where the anthropologist and filmmakers’ ways of working merge.

In the end, this workshop was useful and illuminating for all of us: the team from London, as well as myself, Annelies and Jorn. This was an opportunity for me to pause and reflect on my project in Bali, having just returned to Edinburgh a week and half ago. Time and distance, as well as conversations with like-minded deaf researchers and filmmakers was invaluable in helping forge forward, especially as we feel as if we are on the cusp of an important moment in Anthropology, Applied Linguistics and Deaf Studies with our new approaches to visual methodology, especially deaf ethnographic filmmaking.