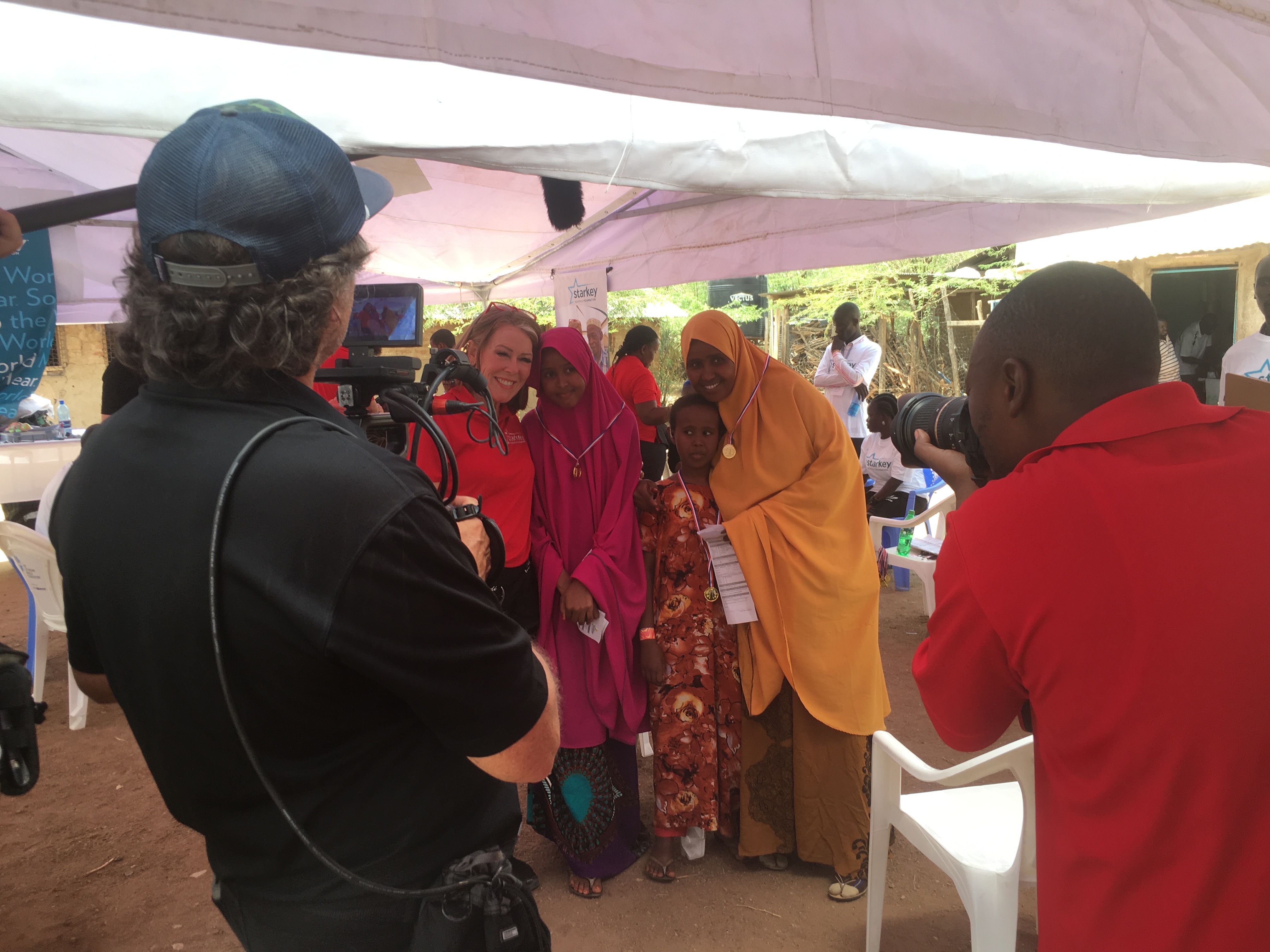 On Sunday 11th March 2018, I was talking with a group of deaf refugees. They told me they were going to a primary school; Baar el Naam, to an event set up by the Starkey Hearing Foundation to provide deaf refugees with free hearing aids.

The Starkey Hearing Foundation’s aim is to give the “gift of hearing” to people in need, both in the U.S. and around the world. Their founder, William F. Austin, has been providing hearing aids to people in need, for over 50 years. Starkey have travelled the globe, collaborating with government, non-governmental organizations and health leaders to help those in need. In doing so, they have reached people in over 100 countries, including countries in Asia, Africa and South America. An annual event, The Summer Sounds Annual Benefit, celebrates Starkey’s 800 volunteers, sponsors and prominent supporters. Public supporters of Starkey, include numerous politicians, world leaders, musicians, celebrities and athletes. Former President George W. Bush, Katy Perry, Ben Affleck and Marlee Matlin are amongst those who have publically supported the Foundation.

The Starkey Hearing Foundation is not alone in providing free used and new hearing aids to the global south. Globally, there are several such associations and foundations. The film “Voices from El-Sayed”, depicts a team bringing cochlear implants to the Bedouin Village of El-Sayed, a village where a large percentage of the population are Deaf. Annelies Kuster’s research describes researchers in Adamorobe, a village in Ghana, undertaking audiometric and genetic investigations, as well as distributing free hearing aids. (Kusters 2015) Kuster noted that whilst none of the deaf population in Adamorobe initially had hearing aids, several teams of audiologists, from both inside and outside of Ghana, visited the village, undertaking audiometric testing and providing free hearing aids. The response from those receiving the hearing aids was mixed. Some deaf people felt the hearing aid provided an interesting introduction to sound, whilst others, whilst noting some enjoyment from the provision of sound, did not review the experience so positively and opted not to use them again. (Kusters 2015).

On this particular day, I attended a church in Kakuma town, the local village to the refugee camp. Having spent the morning in church together, a number of deaf refugees and I travelled by motorbike to the Starkey Hearing Foundation event. It was a sunny and hot day, with temperatures reaching somewhere in the region of 33 to 36 degrees, as is usual for the month of March. Whilst outside the school, I saw a huge queue of people at the gate waiting to enter. I was surprised to see this as I had not seen such a large group of deaf people gathered together in Kakuma before. It later transpired that the queue not only consisted of deaf people but also parents of deaf children, those who had mild ear issues and surprisingly a number of people who were pretending to be deaf. I was puzzled as to these people’s intentions. There was no apparent market for such technology to be re-sold to other refugees in the camps and prior to the event nobody appeared to be interested by hearing aid technology.  As the service provision within the Kakuma refugee camp develops, so too does the unique economy. Refugees living within the camp have established shops, which sell products such as food, drinks, soap and other goods, which are not provided by non-governmental organisations. This question remains in my head during all day. Throughout the day I met a number of deaf refugees who use sign language. Although I had met these individuals previously throughout my fieldwork, this was my first time seeing them in a large group together.

The Starkey Foundation had taken over the school recreational area and erected a number of large white tents, with their logo on the side. The large crowds of people packed into the site made the heat suffocating. I joined the queue with the refugees and followed along their journey through the numerous tents leading up to the gift of a free hearing aid.

The first tent we entered was the registration tent. At this tent the refugees were asked to provide personal details, such as their identification number from UNHCR. As with each tent, upon entering we joined the queue of refugees sitting in chairs waiting for the volunteer to become available. In the second tent, the refugees listened to general hearing aid information, provided by the volunteers. A Sign Language Interpreter was provided for this. The third tent was where the refugees had their ears checked by nurses. The aim of this tent was to distinguish permanent deafness from temporary hearing loss, which could be caused by for example mumps or earplugs. This proved to be a daunting experience for many of the deaf children. Many struggled to understand what the nurses were saying and so were frightened by the interaction. A number of black nurses from NGO, who supported the Starkey Hearing Foundation, tried to make this an easier experience for the children by communicating through gestures.

In the fifth tent a Starkey volunteer, accompanied by a Kiswahili or Arabic interpreter, was tasked with establishing whether the individual was truly deaf. I anticipated this would be done using pure tone audiometry or tympanometry but was surprised to see they did this by asking questions and encouraging repetition of phonetic syllables, such as ba-ba-ba, chi-chi-chi or si-si-si. They could not adjust the hearing aid compatible to the profile of the refugee’s level of audition.

Our journey culminated at the seventh tent. In this tent, the refugees had their new hearing aids fitted for the first time. There were many cameras in this tent. Some of the cameras were recording the reactions of parents, many of whom found it emotional watching their child using a hearing aid for the first time. Some of the children appeared to be confused. This confusion appeared to stem from both their parent’s reaction and because of not being able to follow the dialogue that the parents and cameramen were engaged in. The Starkey Media Team encouraged the parents to have a conversation with their children, which they then recorded on camera. The attached video is an example of this.

In this video, we see the mother saying ; “she is saying ‘I can hear everything now’, she is very happy, really. (She starts to cry) I always pray for God, to help with my daughter, and now I’m saying thank you for your help with my daughter”.  I recorded my own footage at the event.

The footage shared by Starkey’s Media team and reported coverage of the event, stands in stark contrast to my experience. In the footage we see many refugees smiling happily and a mother crying joyfully. I didn’t see many refugees smiling happily. I saw them standing in long lines, arguing with the volunteers about whether or not they were really deaf and struggling to try to get the best of the ear moulds. The footage shared by Starkey’s Media team portrays a happy child; happy with her new hearing aid and happily understanding her mother’s emotional response to the prospect of her being ‘saved’ by it. I didn’t see a happy child. I saw a child who was entirely confused and overwhelmed; a child who was in the midst of a large crowd of volunteers and media team and who didn’t understand any of what they were saying to, or about her.

When I asked a volunteer from the foundation how they matched the hearing aid programme to the refugee’s degree of deafness, she told me they simply increased the volume until they could hear. Whilst hearing sensitivity varies according to the frequency of sounds, which can be measure for and plotted on an audiogram, this was not taken into consideration. They simply turned the volume up. I was also surprised to find that alongside the hearing aid, only a very small number of batteries were supplied. An accompanying card encouraged the hearing aid recipient to call a given number if they wished to receive more. How can a deaf person make a phone call to access this service?  Given that the main concerns of the deaf refugees in the camp were obtaining food, running water and a roof over their head, I cannot imagine battery delivery being a priority in the camp setting.

Several days after the event I noticed a number of the deaf refugees were no longer using their hearing aids. When I asked them why, they told me the ear moulds were painfully uncomfortable and they didn’t feel the hearing aid was working well.

The Starkey Hearing Foundation event is controversial in nature. On one hand, some deaf refugees do wish and dream of being able to hear. The Starkey Hearing Foundation believes that they can offer this, and in doing so, help these people in their daily lives. Sadly, the reality is often different. Whilst some deaf people dream of hearing, the reality is that due to receiving a poorly adjusted device some will hear only a little and some not at all. Whilst the foundation aims to help deaf people in their daily lives, the reality is many receive an ill fitting-uncomfortable mould and wear these hearing aids for a day, before discarding them. Hearing aids are often presented as a ‘quick fix’. In reality hearing aids are a device, which can give a person access to some sounds, not a device, which can turn a deaf person into a hearing person. Lastly, without access to long term audiology follow up and care and an ongoing supply of batteries, what little benefit the deaf refugees gain from these devices cannot be sustained.

The Foundations media coverage of this event highlights their perceived need for their mission, emphasizing the lack of hearing aid support previously offered to refugees in Kakuma. Starkey Hearing Foundation’s founder believes that everyone deserves to be the best they can be and everyone deserves respect. He states, “the least we can do, is do what we can, when we can. And we know how to fix hearing, it’s what we can do, so we should do it.” Whilst trying to give deaf refugees hope and a better future, all Starkey are leaving them with is a useless and unsustainable object. Although publishing emotive media footage, and seeking help from Hollywood’s A-List in order to help the helpless, Starkey’s approach and execution demonstrate a stark lack of understanding as to the reality of the life of deaf refugees, as well as refugees in general.