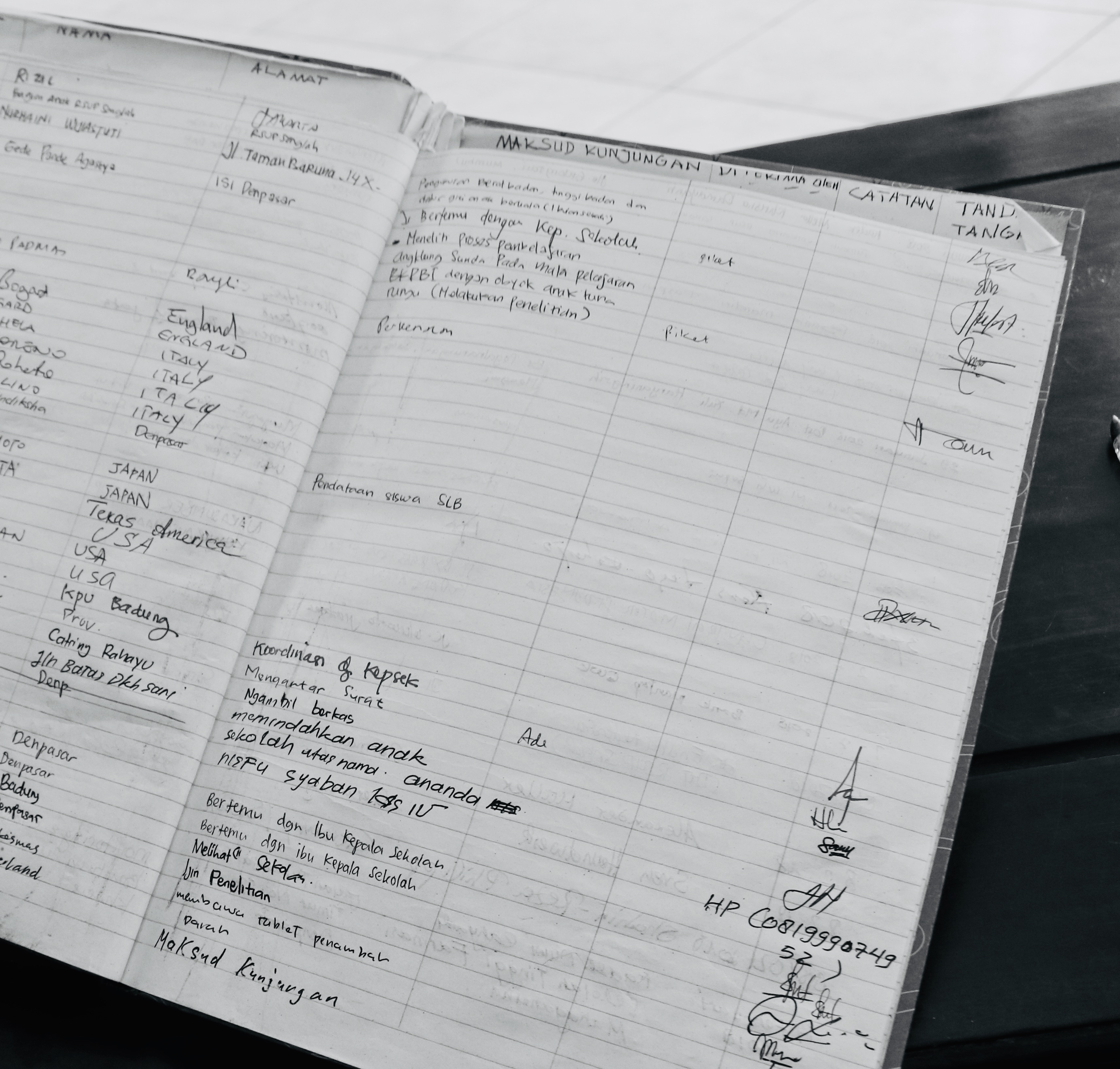 Image: A visitor’s log book at one of the schools for the deaf in Bali listing visitors from England, Italy, the United States, Japan, and Indonesia.

Note: This blog was later developed into a journal article: “Sign to me, not the children”: Ideologies of language contamination at a deaf tourist site in Bali” in Language & Communication Available open access: https://www.sciencedirect.com/science/article/pii/S0271530920300549

On a recent afternoon, I was seated in a semi-circle with my colleagues in the BSL team at Heriot-Watt University. In the dim room, long tables with computers line the walls. We were meeting for one of our regular research sessions, in which we share updates related to our research and scholarship.

After Dr. Sam Lutalo-Kiingi, a visiting British Academy Fellow at Heriot-Watt University from Kyambogo University in Uganda, had finished his presentation, we took turns sharing our research activities since the last meeting. A colleague, a white deaf person from the UK, had recently returned from providing three weeks training in Gambia for a group of 8 deaf Gambians on teaching sign language to hearing people. As he explained his activities, I was struck by the way he described one of the key challenges he had with this training. He said, “I did not want to expose them to my signing, so I spent a lot of time writing on the board and pantomiming.”

This statement was striking because I have seen this sentiment expressed repeatedly during my research career and I have written elsewhere about this (see Moriarty Harrelson 2017). One of the first times was several years ago when I was attending a workshop in Washington, DC and fell into a conversation with a white deaf man who frequently travels abroad. I had just returned from one of my initial fieldwork trips to Cambodia and he asked me whether I had learned Cambodian Sign Language. I told him yes, I had, and that I became more proficient the longer I was embedded in the deaf network in Phnom Penh. In response, he said, “When I travel, I am always careful to never expose them to my sign language.” This conversation in Washington, DC kindled my initial interest in the various kinds of relational moralities involved in transnational deaf interactions, including tourism, research fieldwork and international development interventions.

In this blog post, my aim is not to challenge the premise that deaf tourists should care or act responsibly but rather, to “map” the moral geography of deaf tourist mobilities, especially when they involve encounters between deaf people from the global North and global South.

During MobileDeaf fieldwork in Bali, Indonesia, I visited many sites popular with deaf tourists. One example is as a small private primary school for deaf children in Denpasar, which is funded by donations and support from parents. On this particular day, I accompanied two deaf tourists, one from France and the other from the United Kingdom. We entered the school and checked in with the front desk. Our escort, one of the lead deaf teachers at the school, greeted us, then asked us to sit down in the lobby as he explained the school’s policy on visitors and sign language. He told us in a mixture of International Sign and American Sign Language that he would teach us a few basic signs from BISINDO, Indonesian Sign Language, and that we were not to sign directly to the students if we did not know or use BISINDO. He explained that if we had questions or comments, we should direct our questions to him in our own sign language and he would translate it into BISINDO for the students.

The teacher explained that this was to prevent exposing the students to a sign language that was not “theirs.” Later in an interview, he explained his reasons for this system: he said that there had been problems in the past with American Sign Language and International Sign displacing local signed languages in Indonesia (and other countries in Southeast Asia) and that he did not want the children at the school to learn the “wrong” signs.

Often, transnational contact between deaf people, especially in settings in the global South, involves expectations for moral conduct, particularly where identity, communication and sign languages are concerned. There seems to be a widespread sentiment that certain populations need to be protected from dominant sign languages, such as ASL, and this is only one example of the various moral sentiments about transnational contact between deaf people and their communicative practices.

Other anthropologists have noted similar moralities surrounding ascribed Deaf identities, communication and sign language(s). Indeed, deaf mobility (travel, volunteer teaching, working at NGOs, educational exchanges, and so forth) often involves moral values specific to deaf people, deaf spaces and sign languages, especially if it involves contact between signing deaf people from the global North and the global South (and I will write more about this in a future blog). There is an increasing prevalence of themes such as ‘awareness’, ‘protection’ and ‘respect’ for local signed languages in deaf mobility. Not every deaf tourist I encountered discussed these issues but it was common enough to be noteworthy.

In summary, these themes that have emerged illustrate the complexity of deaf mobility as a moral field of practice. The mapping of moral sentiments draws attention to the fundamental geographical, historical and material inequalities involved in transnational deaf encounters and how these inequalities may be reinforced, resisted, and/or surmounted.