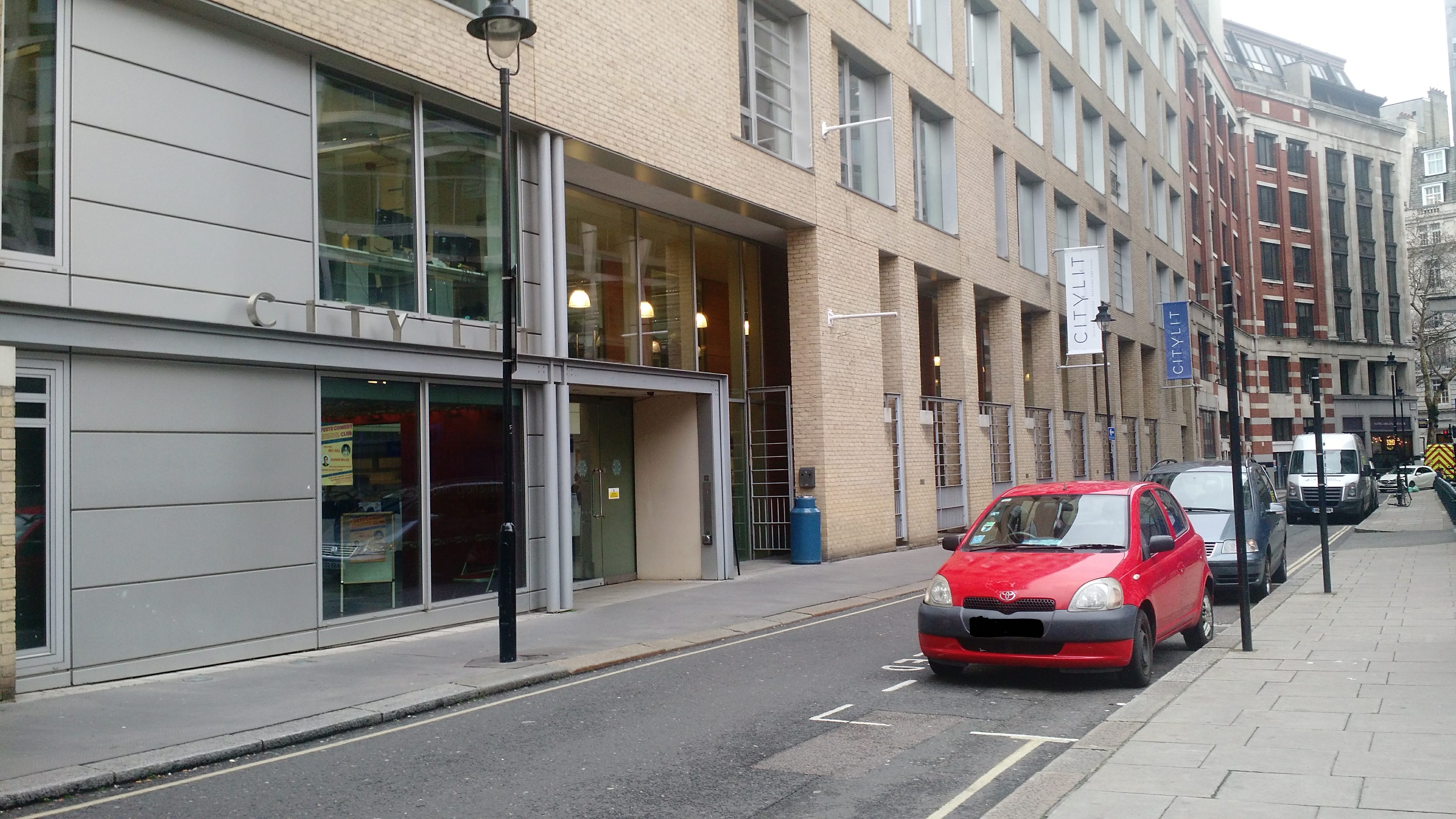 Image: outside of the building, City Lit College, which is on a road with vehicles parked opposite

Of the many observations undertaken in my fieldwork in London none stand out so more marked than City Lit College, which is close to Covent Garden and the Holborn area of the city. Here, deaf people from all backgrounds take a number of courses, but it is a remarkable place in terms of the numbers and variety of deaf migrants who attend. Just a sample of those on courses are from Latvia, Romania, Venezuela, Iran, Kuwait, Mongolia, Sierra Leone, Poland, Pakistan, Ireland, Australia, and many, many more.

I was aware of the nature of diversity at the college due to the many people I came into contact with during my fieldwork. A common theme in my communication with people while attending deaf events and clubs for example, was that City Lit was a place where many migrants congregated. On visiting, it became quickly apparent that not only it was highly recognised as an ‘hub’ for meeting other deaf people and getting a variety of information, it was a place where they could improve their English and gain other skills. There were some who also found it hard to obtain a course there as classes were oversubscribed and there is a waiting list.

City Lit has had connections with deaf people going back several decades, running courses in British Sign Language (BSL) and Lipreading. It has a service dedicated to providing other courses for deaf people – e.g. classes in English, Maths or computing – and also employs a team which provides access to mainstream courses with communication support such as interpreting or note taking. I began taking courses there as a hobby in December 2018, in effect becoming part of the deaf-space itself!

However, on my visits there prior to beginning my courses, it became significant it is a kind of a ‘hub’ where deaf migrants have an opportunity to socialise before and after courses. This sense of City Lit being an important space, or ‘locale’, in many deaf migrant experiences, was confirmed by an interview with a staff member as well as communication with tutors.

There is much to write about City Lit itself as a college that could represent a ‘locale’ in London, if we consider deaf migrant experiences within the idea of translocality That will be part of a future blog post since it is difficult to relate to ‘locale’ without also drawing on other places, spaces, and migrant experiences across London. In this bog post, however, I want to address issues of ethics in ethnographic research as some issues arose regarding the attempts to recruit migrant participants to the MobileDeaf research project.

First, I want to try to, briefly, help the reader visualise City Lit College. When entering at the main doors there is a spacious lobby and reception area, and to the left a reasonably large cafe which is often teeming with students at all times and hours from 9.00am until 8pm during the week, and even at weekends. Deaf people use this space for lunch and several times there will be groups signing, not only deaf people, but also those learning BSL. 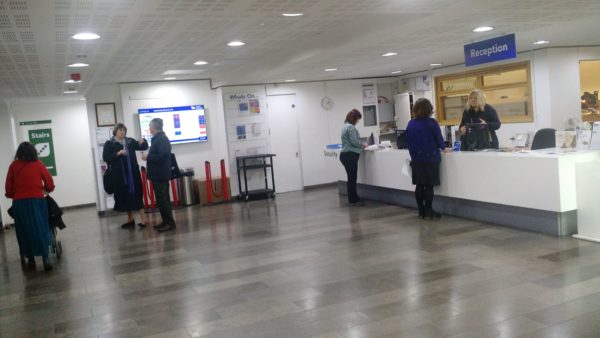 From the lobby area, there are lifts to the Mezzanine, and 1st to 5th floors. The Mezzanine area is also the site of the office that organises access to mainstream courses for deaf and hard of hearing students, which itself is hosted in a room within the library and public PC usage. As can be imagined, there are also groups of deaf students learning there, but it’s on the fourth floor that many of the courses are held and the Deaf studies tutors’ offices is based. Each floor has its own common area and the 4th floor is the most popular since these host courses for deaf students. There is also a balcony where people can go to smoke or hang out for a break during course times. 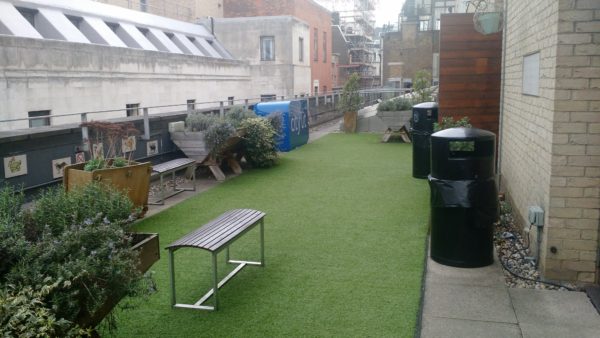 I stress this layout in some detail because already it can be imagined this space can rarely be deemed private unless people find spaces to communicate personal matters, or leave the building altogether and meet up elsewhere. I’ve often been around and about in the building and seen deaf people I do not know signing to each other, unbeknown to them I can understand sign. Not that I eavesdrop on their communication; since I am observing at all parts of the college, I make myself known to people if I am seated nearby who may not know me and introduce myself. The only time this does not happen is if I am in a meeting with my colleague, Sanchu Iyer, I am at City Lit as a student or am just walking by. It is hard to draw a ‘boundary’ though – my ‘observation hat’ is always at hand – and ethics is always on my mind for a subject as sensitive as one on migration in London given the Brexit dominated political climate. 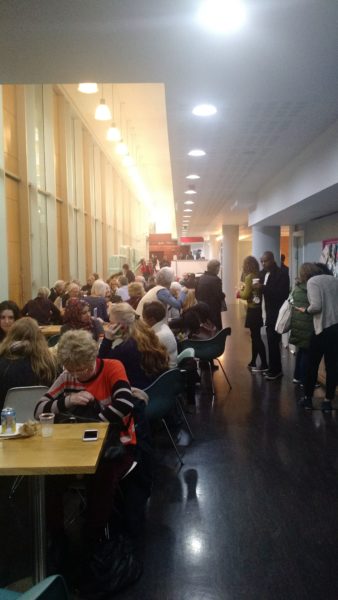 This brings me to my observations in class and also outside of it, but before dwelling further I want to break down the research that we (myself and Sanchu Iyer, then Research Assistant, now PhD student) have undertaken. There are general observations in the canteen, lobby area, library, and common areas. And there are the classroom observations, of which I have had access to three different English courses.

Although two courses are not exclusively for migrants, they were, nevertheless, mainly made up of deaf people who have migrated over a decade or so ago. Some British-born or raised people are also in these classes. The contrast in obtaining consent for research, however, has been one of the most compelling experiences, and I’ll break these into three classes, A and B and C. 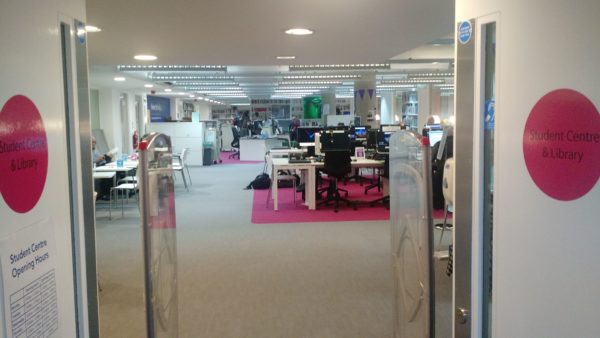 For all courses I was introduced, and each tutor gave me time to explain the research project and what I was there for. Sanchu and I were well received, but whereas in class A there was a reluctance to be filmed and for us to use filming footage in our research, in class B and C we had very little problem with obtaining consent for in-class filming. For Class A, for example, a film was made where students went on a visit to a city attraction which was filmed by the tutor and whereas many students were happy for this to be handed over to me, others were more reluctant, and therefore we were unable to use this film. The reason given is that it was unclear for what purpose the film was being used.

I find this highly significant, as our reasons and purposes are, indeed, quite fluid. Many research projects are keen to film the use of sign language, and indeed the possibilities are endless given the wide range of countries students are from. We were interested in language use – after all one of our key themes is translanguaging – but it wasn’t the main one. We want to film migrants going about their everyday lives, and a trip of this nature would be useful for our purposes as while we would, indeed, be paying attention to the language use, we would also be interested to see how those present interact with each other, the subjects they discuss, who says and does what. We would have been exploring how people from different countries and backgrounds interact.

For Class B and C, the camera presented no obstacle. We were able to film an entire class interaction during a session in Class B, for example. Class C was different, however, in that we were specifically aiming to recruit people to take part in the ethnographic film that we will create in the frame of the project. Again, as with all classes, we were well received, although some students did immediately express a desire not to participate, but they had no objections to being in any film shots. For this class, we attended regularly, sitting in on some lessons, mixing with people in the common room and cafe area, getting to know students and also enabling students to find out a bit more about us and what we wanted, all without using a camera.

Throughout our time observing, it soon became apparent that several in the class were not sure why we were there, so we needed to repeat and explain what we were hoping to achieve. One student, for example, asked if we were there to learn English. A few weeks later, some students stated explicitly that they did not want to be involved, while in other cases students opened up, but when we suggested their information would be ideal for our film, they expressed a reluctance to go further. Slowly, it did become apparent, our initial idea of focusing our ethnographic film on deaf migrants at City Lit, with individual, ‘deeper’ stories, flowing from there, was not a viable option. Although one person was keen to be involved, it is telling that the more we got to know students, the more they got to know about the film, the less willing they were to become involved.

It is too early to draw in-depth conclusions of the ‘why’s’ here, but the first consideration is that it is a voluntary endeavour for any layperson to participate in a public film. Also, many of our participants are in a position of vulnerability due to their migration status. When people did state why they didn’t wish to participate they gave many reasons, for example, they fear for their lives if they are seen in film, it may have an impact on their immigration status, or that they didn’t think they had anything valuable to offer the production. This question is for further exploration and analysis; either way, it is crucial to find a sensitive balance through encouraging a person to be in a film through building up trust, and ‘selling’ the benefits of being in a public film.

In terms of our positionality, it might be curious to any reader that we approach our study as ‘emic’ ethnographic researchers, since we are both deaf and fluent in multiple sign languages, and therefore we share some things in common with research participants.  However, I am a white male British citizen, Sanchu is an Asian female British woman, and our connections with deaf migrant communities across the city also varies. I (Steve) have been living in the city since 2015 in a non-research working capacity and has been actively engaged in research fieldwork since February 2018 (see earlier blog post here). Sanchu is born and raised in London and through her work with a number of deaf organisations in the city, has several migrant connections. In other words, I am reflecting on a year of experience of fieldwork where there is no established ‘centre’ (as in Glasgow for example), where deaf migrants congregate.

This has meant starting over repeatedly when meeting migrants and therefore, my data collection stresses the breadth and extent of the migrant networks rather than depth. It has become a mapping exercise, a cross-sectional study where patterns can be identified (e.g. experiences, language usage). Sanchu’s PhD research aim is to work with a smaller migrant deaf group, in-depth over time. This doesn’t mean I am assuming it is impossible to build connections and make an in-depth visual representation of deaf migrant lives in London by virtue of not being a deaf migrant, but it undoubtedly requires a long-term building of trust with a smaller group of people. We aim to start filming in April 2019 and are currently in the arduous process of recruiting participants, and will keep the readers of the MobileDeaf blog posted on our progress.